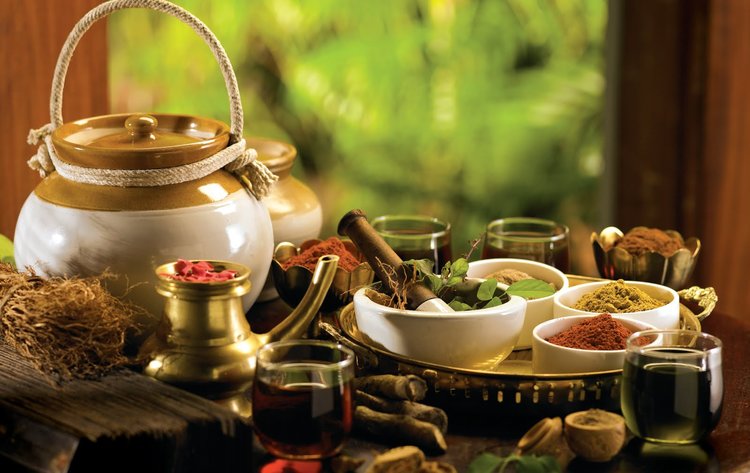 Ayurveda and Yoga are India’s gift to the world to help humanity achieve better health and longevity.Ayurveda is the science of living well, living long and strong. (If you are wondering how to pronounce Ayurveda, you are showing great respect for this science already. Pronounced AA-YOOR-VEY-DAH, the literal translation from Sanskrit, India’s ancient language,  is "‘Ayur” life, “Veda” knowledge)

Human life is chiefly concerned with a wholesome diet, restorative deep sleep, and the pursuit of desires for wealth, love, harmonious relationships, and freedom from diseases. When sick we wish to heal as quickly as possible and know what caused the sickness so we may stay cautious.

Majority of Ayurveda is passed through elders of families as dinacharya, daily rituals and ritucharya, seasonal rituals. This is the lived experience of Ayurveda as taught by heads of families and communities, passed on to the next generation through role modeling.

The young ones learn what to cook, how to put together recipes, what to eat seasonally, how to grow food, and when to fast.

They learn daily rituals that teach them when to rest, when to wake up, how to exercise and what to wear to protect themselves from the elements.

The arc of the Sun, the waxing and waning of the moon, the movements of the planets, and the arrival of the equinoxes guide the changes in diet, clothing, exercise, community gathering, festivals, and fasting.

Such a living, breathing Ayurveda is still practiced in rural India, especially in the Indian State of Kerala.

Even though until the 17th century the meeting of East and West was symbiotic and one of mutual appreciation, the tide turned in the 18th century. Once establishing Aryan supremacy became East India Company’s (the Colonial corporation that ruled in proxy for the British Empire) chief goal, Yoga and Ayurveda were systematically wiped out from the mainstream as a deliberate effort to subjugate and control the masses.

Yoga and Ayurveda survived only in the fringes, in the depths of rural India, in remote ashrams and under royal patronage from a handful of ruling families like the Wodeyars of Bangalore, the King of Varanasi and the Royal houses of Kerala.

The therapeutic and healing aspect of Ayurveda through medicines, classification of herbs and the practice of medicine itself was written down some time in 1000 BC by Acharya Sushruta.

Sushruta, the father of Surgery, was the royal physician to the Kings of Kashi or modern day Varanasi.

Most of early written Ayurveda as medicine is in Sanskrit verses and chiefly there are three encyclopedias and three smaller works of importance which are still taught in Ayurveda medical schools.

If you are interested to read the history of Ayurveda medicine and major works still in use, please read my blog here